So, I’ve been baking again.

And if you like chocolate, coffee, salted caramel, snickers or sugar and butter in general, you will LOVE these cupcakes.

Andrew’s Cousin (also Lucy’s bestie – Perth is too small) is getting married in under a month!!! We celebrated her kitchen tea this past weekend, and the bridesmaids asked if I could contribute my baking skillz.

I’m sure you all know by now that I will take any opportunity to bake, so this was a no brainer. Also, I found this video by Cupcake Jemma and was DYING to try it out. The name itself says it all: Salted Caramel Chocolate Mudslide Cupcakes. C’mon!! 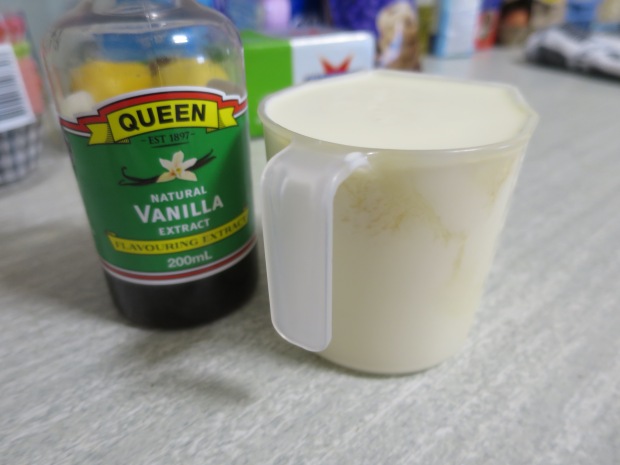 First up, we’ve gotta make some Salted Caramel, which is so much easier than you think!
Pop one teaspoon of vanilla extract (essence is way better, but this is what I had) into 1 cup of double cream, and put to the side.
Put a tea towel down on your bench, you’ll be needing this very soon!

Then, combine 6 tablespoons of tap water with a cup of caster sugar and bang it on the heat (that was a bit Jamie Oliver wasn’t it?). Now here’s the tricky part: leave it on medium heat for around 8-10 minutes. Do not touch it. No stirring, no whisking, no sloshing around. Let it do it’s thing.

Take it off the heat, and add in your cream. AND NOW YOU GET TO STIR. Please don’t stop stirring while you pour the cream in steadily until it’s all combined. It will then smell unbelievable and look like all your caramel dreams. Which is when you add in a teaspoon of good quality sea salt flakes and set the jar aside for later on. 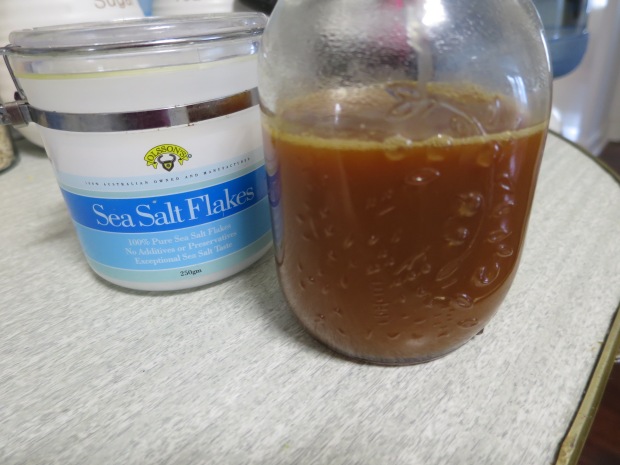 Add the dry into the wet and combine, simples! 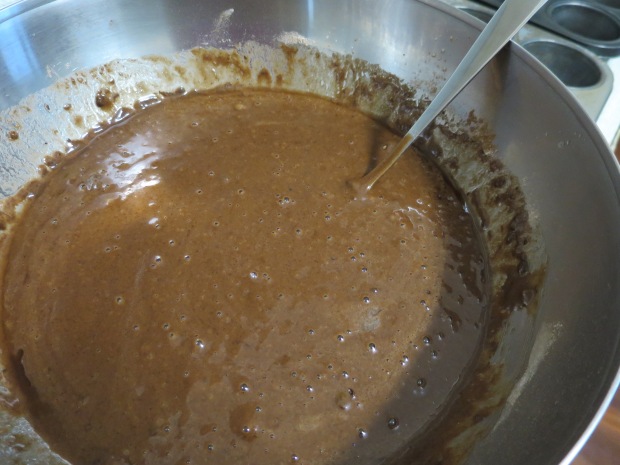 Pop them into cupcake cases, and then into a 180 degree oven for 22 minutes. While they’re cooking and getting even more delicious, move onto the icing.

Start by beating 300g soft unsalted butter until it’s light and fluffy (I use a hand mixer, but a standing mixer is perfecto). Next up, 540g SIFTED icing sugar is added in two stages. I say SIFTED in CAPITAL LETTERS because I didn’t sift mine, and had piping bag issues later on. It wasn’t the end of the world, but life is easier with sifted icing sugar.
Add in half of the salted caramel we made earlier (around 150ml) and whiz away. 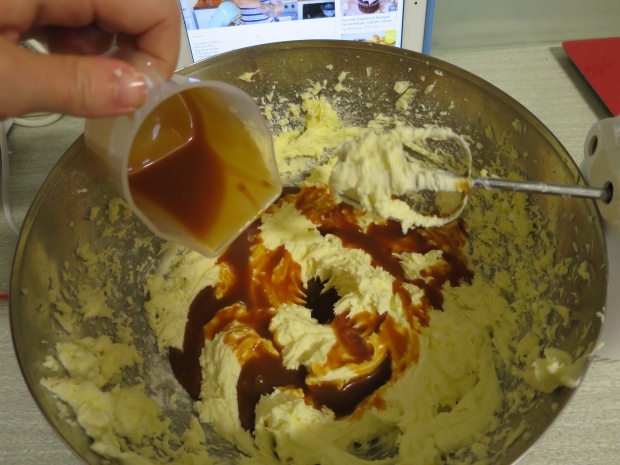 These bad boys come out of the oven, and it’s time for the sneaky part.

Using a chopstick, or something similar, poke a decent hole in the top of each cupcake. This is where the rest of that amazing salted caramel goes!

Frost your cupcakes however you like, piped or spooned on, and you’re almost good to go! I had a little of the salted caramel left over, so I drizzled that over the top. As per Jemma’s suggestion, I had also frozen mini snickers bars ahead of time, to chop up and place on top. Because these cupcakes didn’t have enough chocolate in them already…

There you have it, the final product:

So dense, soft and delectable (I’m avoiding the M word, but you all know it). I went a little light on the frosting, but as these were very sweet and rich, I think it worked out well. 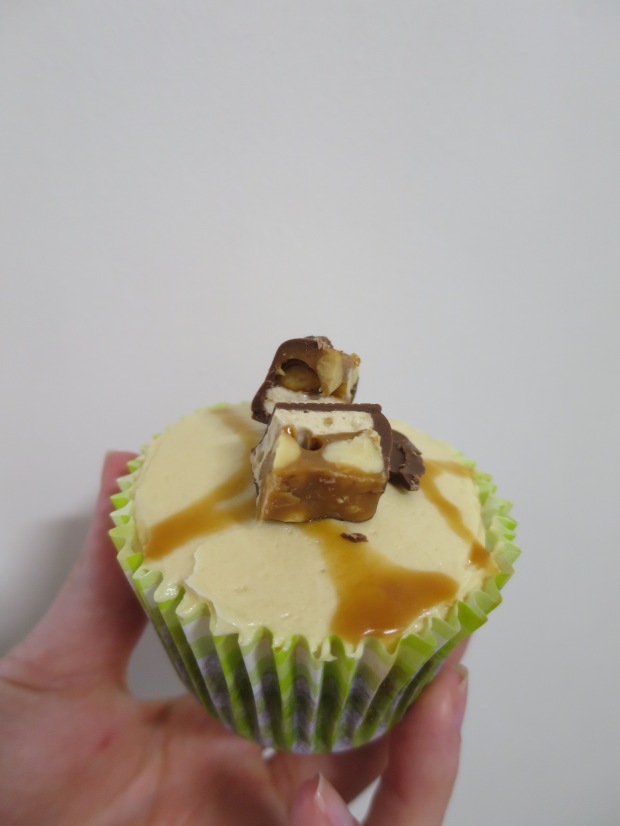 Go on, give them a go. You know you want 24 of these puppies to yourself…

Welcome 2016, it’s very nice to meet you. Minus the lingering hangover, I like you already.

I’m very excited to see what you have in store for me, and for Andrew.

We have kick-started our year hanging out at home, watching Star Wars and packing up the Christmas decorations. For the first time, I’m actually not too sad about Christmas being over, because I’ve got a good feeling about what’s coming next.

Before, we get into any of that though, let’s reminisce a little.
Christmas morning was spent at Andrew’s parents place with coffee in hand and nibbling on potato cakes topped with smoked salmon and cream cheese. Lunch at Mum’s house was perfection. The food was spot on and absolutely delicious, with just enough for leftover packs. We spent the afternoon sipping tea and watching the Grinch until we were ready to do it all over again.
Dinner with Andrew’s loud, crazy, lovely family means a huge secret santa game of stealing and swapping, more food than you could ever imagine and so much laughter.

I hope you all had just as amazing day!

A few friend-related events, many busy days and exercise attempts later, brought us to New Years Eve. This year, Andrew organised for us and 22 of our closest friends to take part in a small ‘tour de fridge’, with just 5 stops very close to one another.
Each house had a loose theme, and we picked two drinks accordingly. Our house became the British house with Pimms and Gin & Tonic on offer. Never one to shy away from a theme, I wanted to go one step further and try out a new cupcake recipe I stumbled across. 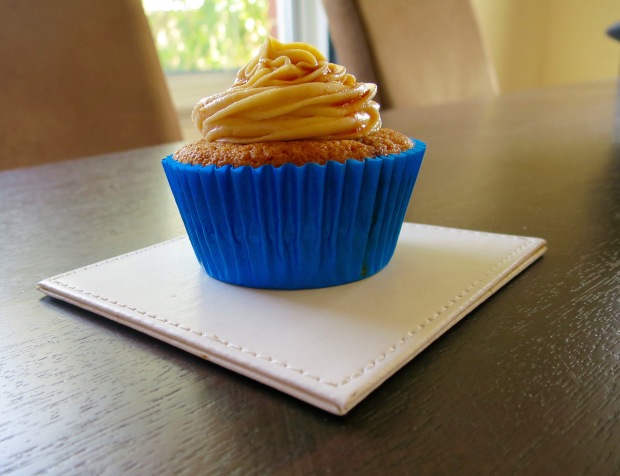 Thanks to Cupcake Jemma (friend of Jamie Oliver) I whipped these up yesterday, and despite having a lot of elements, it was a fantastic recipe to follow. 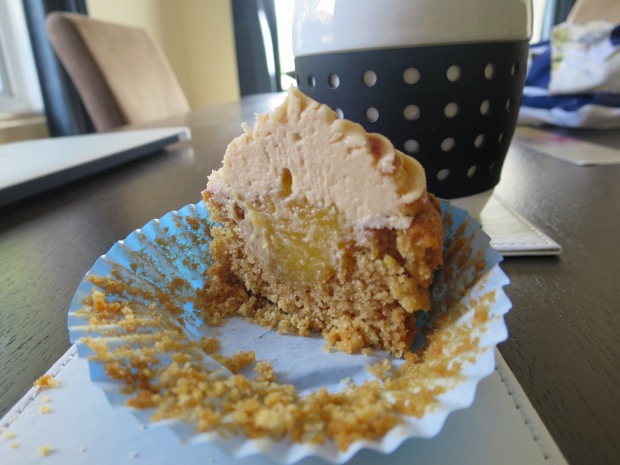 They were time consuming, but so much fun to make, and very well received. Not many can refuse a little sugar on New Years!

And now, I need to get back to exercise. Ha! Soon enough… 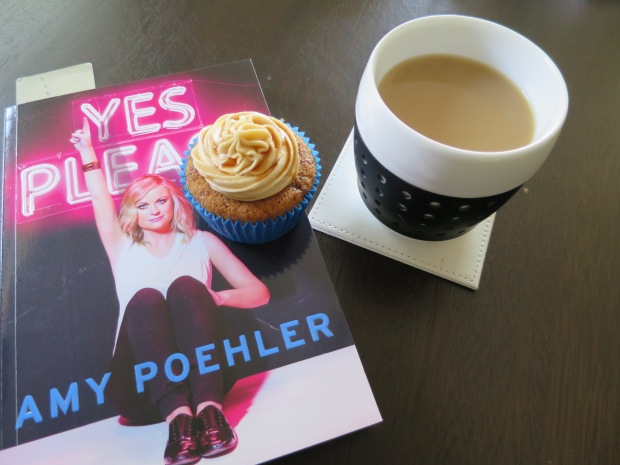 Happy New Year everyone, wishing you lots of love and big smiles for this fresh year.
Hanbel.
x 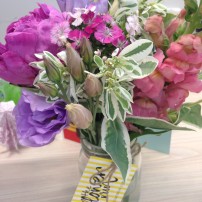 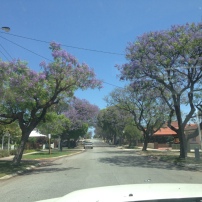 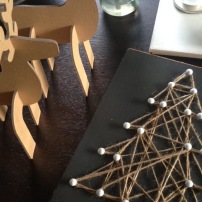 1. Beach walks with my gal LB. 2. 100 cupcakes, tied up with string. 3. The BEST birthday treat – Topdup Donut. 4. The Boy does well. 5. A terrible, hurried snap of the Echidna we found (I was far too excited!). 6. Jacaranda season is the prettiest. 7. Christmas crafts! 8. Coffee pit stop in Freo. 9. The prettiest wrapping paper. 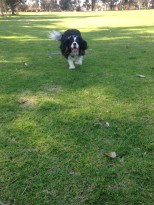 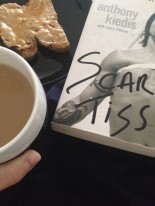 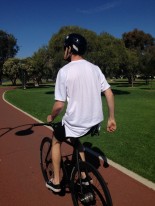 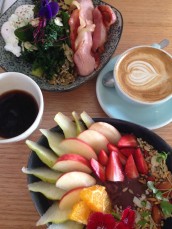 That word definitely looks like it should mean a sweaty blog.
But no, I really mean blog inspiration, but I shortened it to be like the cool kids. Totes on fleek.

This week, I was following my daily routine – breakfast, instagram, work, work, work, check blogs in the breaks, and I stumbled across this post. Cupcakes and Cashmere is one of my favourites to read [side note: Emily just launched her own clothing line under the same name and I am coveting it all!].

Emily is from LA, so obviously a lot of these suggestions are LA based, or at least feature in the states.
However, Australia has some damn good food and I have so many favourites in Perth, that it got me thinking about the best things I’ve ever eaten.

This was pretty hard to narrow down, but I’ve kept my list to 10. Aaaaaaaaand the winners are:

1. Noodles
Pad Seuw from Chin Chin, in Melbourne.
This restaurant was at the top of Anh and my “must do in Melbourne” list; and for good reason. This noodle dish was by far the most amazing I have ever eaten. Featuring six hour braised Wagyu Beef (back when I was on the red meat train) it melted in the mouth and left us gobsmacked! I’m not sure if its still on the menu, but they would have replaced it with something incredible I’m sure.

2. Ice Cream
Peanut butter something or other from Gelato Messina, Sydney.
Again, the menu changes regularly, but anything with peanut butter in it is incredible. Props to them for the awesome and creative names too.

3. Taco
Fish tacos from Bib & Tucker.
These are all about texture, the perfect crunch from the lightly battered fish balanced out by the corn, avocado and punchy mayo. Runners up goes to La Cholita, who do a terrific beef tongue taco.

4. Pancakes
Buckwheat pancakes from The Little Bird Cafe, Northbridge. Fresh, colourful and so, so pretty! These are delightful, and delightfully filling. I dare you try to finish one.

5. Cupcakes
Sticky Date, from Coles. No joke, they are the best cupcakes I’ve had in a long time! Super soft, perfect frosting to cake ratio and $4.50 for 4-pack doesn’t hurt in the slightest. 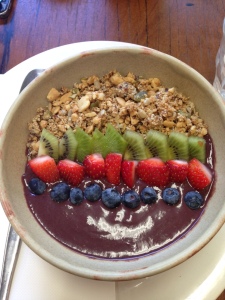 6. Breakfast
I couldn’t narrow this down. So there are two: The Acai Bowl and the Smoked Bacon & Roasted Field Mushroom – both from Hylin, West Leederville.
I’m actually drooling thinking about that perfect mushroom, bacon and heavenly pea puree combination. 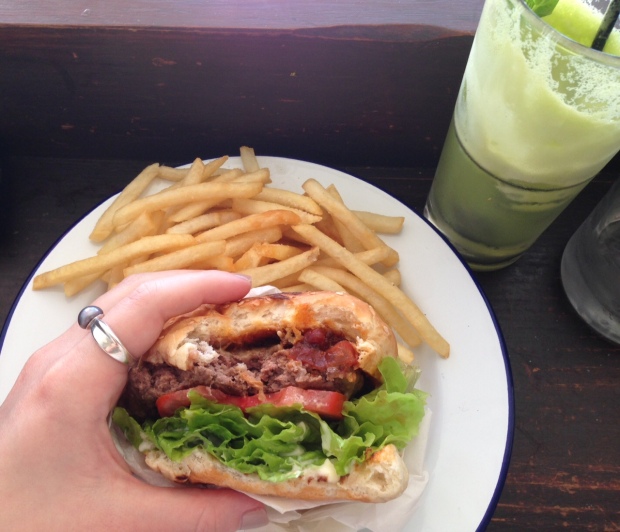 7. Burger
Hemingway’s Burger, from Hemingway’s in Manly. It appears to be a humble beef burger, but it is so much more than that.
I gave up red meat a few months ago, and I would change my mind 100% if I had one of these in my hand.
It was my perfect burger.

8. Japanese
Black Cod Miso, from Nobu. This is obviously not something I eat everyday, but I have been lucky enough to try it more than once. Every time I do, I am in heaven. The cod is so silky, and the miso accompanies it beautifully.

9. Dessert
Peanut Butter Parfait, from El Publico. I did try this after a coupla’ tequilas, so my memory might be betraying me.
However, it is Peanut. Butter. Parfait. I think I’ve said enough. 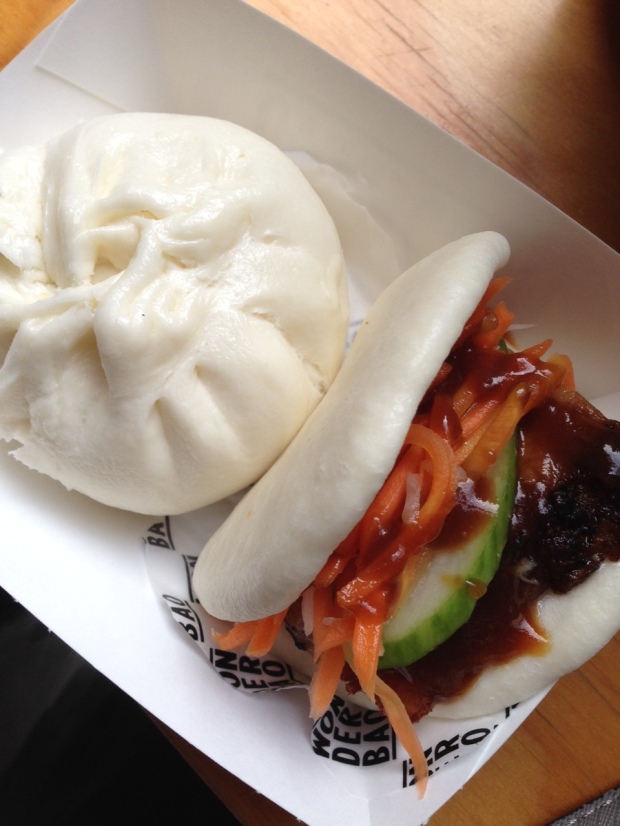 10. Bao/Dumplings
Char Sui Bao, from Wonderbao, Melbourne. Two attempts to eat at this hole in the wall (FYI – they are closed on Sundays) were well worth our while. These beautiful, soft buns filled with moorish pork, crunchy veg and oozing sauce are the perfect handful of flavour.

I kept this list domestic, but I’m not sure why because now I’m remembering all of the amazing things I have eaten on my travels. Oh well, a blog post for another time!

I need to go eat now. Someone bring me one of everything!

The World of Hanbel
Blog at WordPress.com.
Loading Comments...